Greenery Siem Munster has been nominated and awarded with several awards. This is good to know, but most of all we are proud of our sustainability certification. Sustainability is more and more important in the world, also in agricultural business, and our greenery does its efforts to produce its tulips as sustainable as possible.

The tulip greenery is MPS-A+ certificated, which means we produce at the highest environmental standards in the flower producing business.

The greenery is also Global Gap certified. This certifcation improves food safety and makes sure that food

products in the world are produced  and certified under comparable circumstances.

AMBASSADOR OF THE SCENERY

Farmers wife Sandra is appointed as Ambassador of the Scenery by the institute IVN. She loves to inform her guests about the surroundings and activities in the region.

PASSION ON THE COUNTRYSIDE AWARD

In 2013 the tulip excursion is nominated for the award: Passion on the Countryside. Siem and Sandra reached the second place at the audience award. 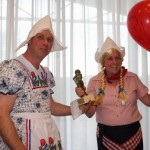 In 2013 farmers wife Sandra received the well know ‘Ad van Oers ijzer’ from the Carnival Association de Meerkoetelaars. This award is made for eloquent inhabitants of the polder Wieringermeer, who love to speach about the region. With all het tourists Sandra talks about the polder all day long and therefor she received the award in 2013.

In 2011 Sandra received the Pioneers Award from the mayor Mister Leegwater. This award was given because of the fact that Sandra ‘makes sure the world knows about the Wieringermeerpolder in a funny way’.  A great honour!

In 2011 Sandra received the VVD Award from Mr. Fred Teeven, for stimulating tourism in the community of Wieringermeer. The VVD praised Sandra for her active entrepreneurship and the cooperations she started in the region to reach a growing number of visitors for the local touristic economy.